Where history comes alive and inspiration sets sail.  A wonderful established community with the Pacific Ocean on one side and the San Diego Bay on the other peninsula. 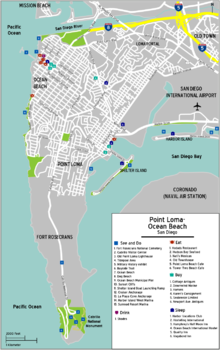 There are several distinct neighborhoods in the Point Loma peninsula.[31] Most neighborhoods in Point Loma consist primarily of single family homes.[3] The commercial and retail heart of the peninsula is called Point Loma Village. Its retail establishments serve local residents as well as yachting and sport fishing interests.[3] The streets in Point Loma Village are lined with hundreds of jacaranda trees as a result of community beautification efforts. The newest commercial and retail area is found at Liberty Station, site of the former Naval Training Center San Diego, which also has residential and educational sections.[32] The Midway district at the northern end of the peninsula, adjacent to the San Diego River and the I-5 and I-8 freeways, is primarily commercial and industrial with a few small residential developments.[28]

Connected to Point Loma Village by a causeway is Shelter Island, which is actually not an island but a former sandbank in San Diego Bay. Shelter Island was developed in the 1950s after it was built up into dry land using material dredged from the bay.[33] It is under the control of the Port of San Diego and contains hotels, restaurants, marinas, and public parkland.

The bayside residential area called La Playa lies somewhat north of the original La Playa, the beach where commercial and military ships anchored during the early days of the city. La Playa includes some of the most expensive homes in San Diego. Some bayfront homes have private piers for small boats.[3] The hills above La Playa are known as the Wooded Area on the bay side of Catalina Boulevard (so called because of the many mature trees in the area), and the College Area on the ocean side (because of the proximity of Point Loma Nazarene College). The Sunset Cliffs neighborhood is on the west side, above ocean bluffs, and is known for its views of the Pacific Ocean.[3]

Roseville, named for San Diego pioneer Louis Rose,[34] encompasses the oldest settled part of the peninsula. Roseville was originally a separate town but later was absorbed into San Diego.[35] Many Portuguese fishermen and fishing boat owners settled there more than 100 years ago. Some people refer to the area as "Tunaville" because of its association with the tuna-fishing fleet. The hilly area above Roseville is known as Fleetridge, named for its developer David Fleet, a son of Reuben H. Fleet.[36]

The bayside hills between Rosecrans Street and Chatsworth Boulevard north of Nimitz Boulevard are known as Loma Portal.[3] A distinctive feature of this neighborhood is the location of street lights in the middle of several street intersections instead of on the sidewalk. Loma Portal lies directly in the takeoff pattern for planes from Lindbergh Field, making it the home of the "Point Loma Pause" where all conversation ceases temporarily due to airplane noise.[37] The east-west streets in Roseville and Loma Portal are known as the "alphabetical author streets". The streets are named for authors in alphabetical order from Addison to Zola, with a second partial cycle from Alcott to Lytton.

The northwest corner of the peninsula, where the San Diego River flows into the ocean, is a separate community known as Ocean Beach.[3] The southern one-third of the Point Loma Peninsula is entirely federal land, including Naval Base Point Loma, Fort Rosecrans National Cemetery, and Cabrillo National Monument.

Find a Home in Point Loma

See All Neighborhoods
This information is deemed reliable but not guaranteed. You should rely on this information only to decide whether or not to further investigate a particular property. BEFORE MAKING ANY OTHER DECISION, YOU SHOULD PERSONALLY INVESTIGATE THE FACTS (e.g. square footage and lot size) with the assistance of an appropriate professional. You may use this information only to identify properties you may be interested in investigating further. All uses except for personal, non-commercial use in accordance with the foregoing purpose are prohibited. Redistribution or copying of this information, any photographs or video tours is strictly prohibited.

This information is derived from the Internet Data Exchange (IDX) service provided by San Diego MLS. Displayed property listings may be held by a brokerage firm other than the broker and/or agent responsible for this display. The information and any photographs and video tours and the compilation from which they are derived is protected by copyright. Compilation © 2020 San Diego MLS.